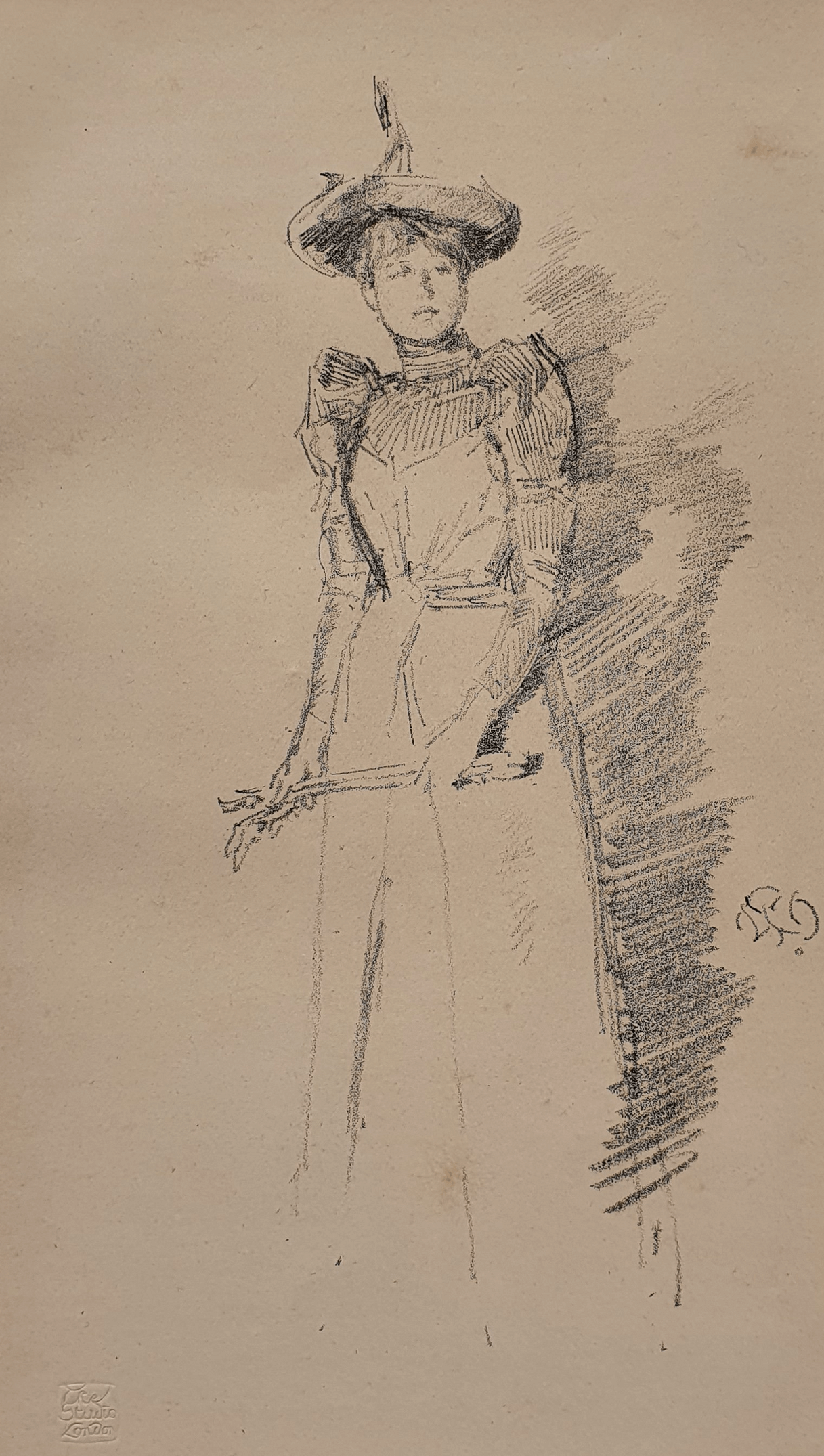 James Abbott McNeill Whistler created Gants de Suède (suede gloves) for the English periodical The Studio. This monthly magazine was founded as an art publication. It focussed on then-contemporary art and applied arts. In addition to the richly illustrated magazine, it was supplemented by a monthly auto-lithograph (a lithograph where the artist was directly involved in the process, as opposed to reproductive lithography).

For The Studio, Whistler re-created an earlier drawing he had made of his sister-in-law and secretary Ethel Birnie Philip. He employed his typical style of portraiture by portraying the woman in suggested full-length, but omitting to depict the hem of the dress and feet. Behind the woman, a deep shadow is suggested by broad hatching strokes with the lithographic pencil. Whistler shows his mastery as a draughtsman by contrasting the harsh shadows with barely ledgible markings to indicate volume in the dress.

The woman is dressed in fashionable clothing, and holds her suede gloves – which the work is named after. Gants de Suède was signed on the plate by Whistler’s butterfly monogram, and embossed with a blind stamp by The Studio on the lower-left corner.

On page 26 of the thirteenth edition of The Studio, the lithograph was mentioned: ‘The Lithographic Supplement issued with each copy of The Studio this month, is an hitherto unpublished drawing by Mr. James McNeill Whistler, entitled Gants de Suède. No copies will be sold separately and the edition is strictly limited.’

Besides the approximately 3000 The Studio proofs, a further 53 proofs were apparently printed, before the stone being erased. These additional prints do not carry the blind stamp.

The print is in good condition, aside from lightly toned paper, some minor stains and a superficial crease beyond the sight-edge.


James Abbott McNeill Whistler (1834-1903) was born in Lowell Massachusetts, as the son of a railway engineer. After a failed attempt at becoming a military officer, he travelled to Paris to become a painter. There he studied under Charles Gleyre for a brief period of time.

Whistler however, soon mostly learned autodidactically. During the late 1850s he befriended several artists and writers from the avant-garde, some of which he would remain friends with for a long time. He moved to London in 1859 where he lived and worked for nearly the rest of his life.

Throughout his career, he used scandals to further his cause. In 1878 he sued critic John Ruskin for libel after Ruskin had publicly attacked a painting by Whistler. Despite winning the suit, Whistler went bankrupt. Throughout the 1880s he worked to change his fortunes, and by the 1890s he had managed to regain his status as a leading artist.