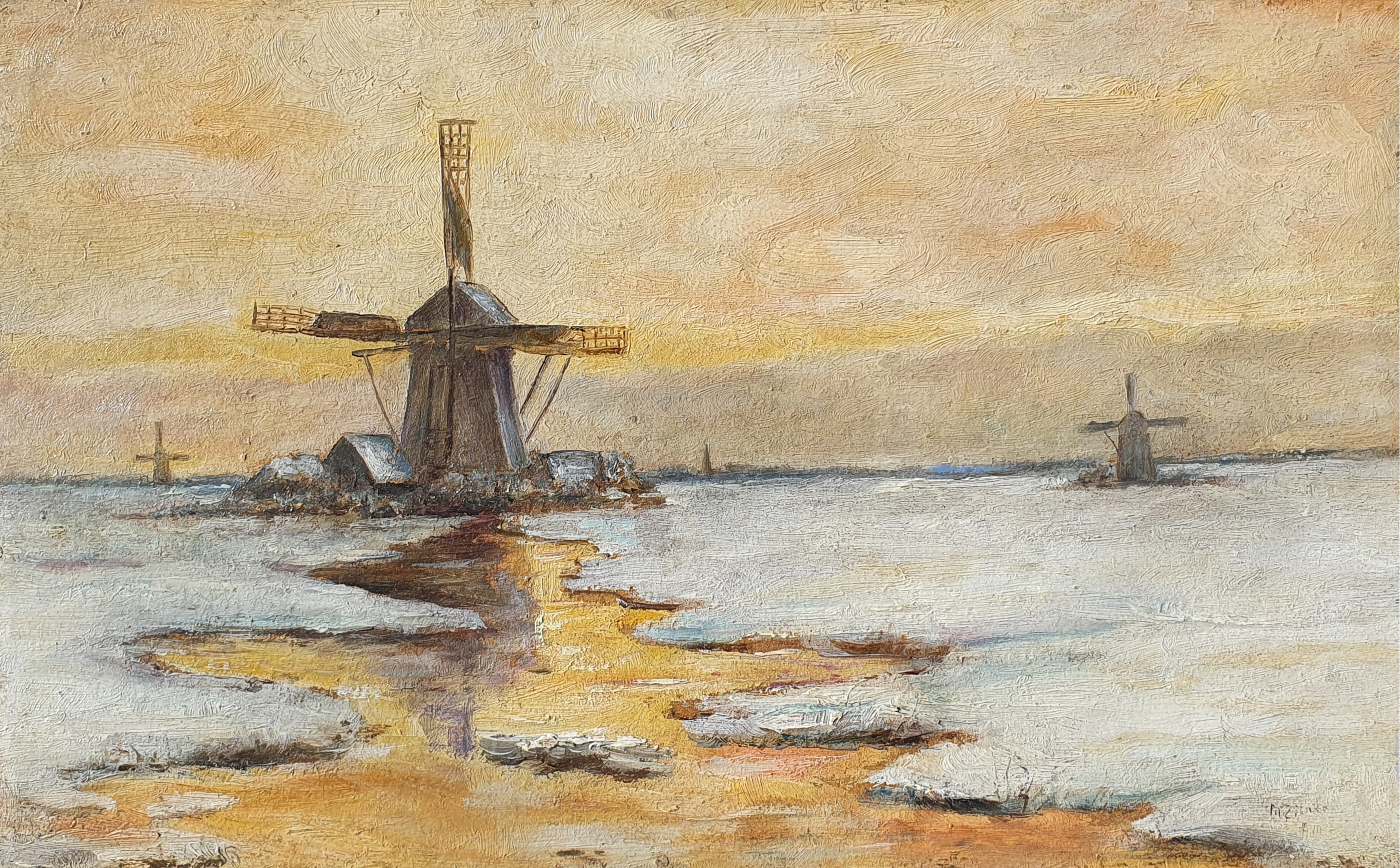 Philip Zilcken used an unusual palette to create the atmosphere for this winter view of the Dutch countryside. Winter in Holland may be the same painting that Zilcken showed in 1909 on the 79th international exhibition in the Museum of Modern Art in Rome, Italy. In the review of the exhibition in De Nieuwe Courant, on 10 April 1909, the reviewer remarked that out of all Dutch contributors, Zilcken was the only artist that proved of international cachet. The writer stated that ‘An old gate in Algiers’ and ‘Winter in Holland’ were painted in eccentric and atmospheric tones that draw much attention. By doing so, the reviewer wrote that Zilcken was the only Dutch artist standing out from the masses.

This landscape of the countryside show just those atmospheric tints the reviewer praised in Zilcken’s Winter in Holland. By having the warmly coloured sky reflected in the water stretching towards the closest windmill, Zilcken created a stark contrast with the snow on the fields. Two more windmills can be seen in the background. All three windmills have their sails in the short rest position. When millers weren’t expecting rain for a short while, the sails would be left in this position, resembling a big ‘+’ sign.

Especially in the sky, Zilcken used his typical, vivid brushstrokes, almost giving a sense of movement. This painting on board is signed ‘Ph Zilcken’ on the lower right.


Philip Zilcken (1857-1930) was born The Hague, and from his 16th he was the private secretary of queen Sophie of The Netherlands. He started painting around his 18th, and he became a pupil of the The Hague drawing academy. There he was taught by Karel Klinkenberg and Anton Mauve.

Zilcken was tremendously successful as a painter, and received both awards and titles. Between 1896 and 1905 he was an editor of Elsevier's Geïllustreerd Maandschrift, a monthly magazine about culture and literature. As an editor he was a champion for the young artists called the 'Tachtigers' (Movement of Eighty). As a member of the Nederlandse Etsclub (Dutch Etching Society) he was well-acquainted to several of the Tachtigers.

Aside from his work in The Netherlands, Zilcken was an avid traveller, with a specific interest in France and North-Africa. He visited Algiers and Egypt, and the oriental views he painted are among his most popular works. Later in his life, Zilcken would spend his life travelling between The Hague and Villefranche-sur-Mer, where he died in 1930.